Hey. I know you're struggling with a lot of emotions right now after seeing an officer of the law kneel down and knowingly murder a black man in broad daylight.

If you are in a position to do so, take action. You may make some mis-steps. I make them too. We are human. Don't let that stop you from continuing the road. You will learn from your mistakes and you will do better next time.

Below are a few ideas of ways to start to take action. I'm sure you've got a lot of ideas too. Please share them with me so I can add them here?

1. Don't teach your kids to be colorblind.

Stamped: Racism, Antiracism, and You by Jason Reynolds and Ibram X. Kendi

(The adult version: How to be an anti-racist, by Ibram X. Kendi)

This Book is Anti-Racist by Tiffany Jewel

The Hate You Give by Angie Thomas

On The Come Up by Angie Thomas

Black Enough: Stories of Being Young and Black in America by Ibi Zoboi

2. Vote with your Dollars

Free the 350  This Bailfund seeks to prioritize bailing out Black people incarcerated in the Dane County jail system, and also seeks to end the unjust and antiquated prison and jail system in general.

3. Vote in State and Local Elections

"The elected officials who matter most in reforming police departments and the criminal justice system work at the state and local levels."

Justice for Floyd on Change.org

Justice for Floyd on Color of Change

6. Write to your public officials, elected or otherwise.

For an easy "bot" that helps you send messages to your elected officials through text, text "RESIST" to 50409.

We are calling on public officials to adopt the following demands:

Respond to mental health crises with healthcare, not policing responses.

Require independent investigations in all cases where police kill or seriously injure people.

End the profit motive in policing.

Invest in healthy communities not policing

Do away with unfair protections for officers in police union contracts and Law Enforcement Officers’ ‘Bills of Rights.’

Increase transparency and accountability for officers with records of misconduct.

From Ally to Accomplice

How to find your place in the the social change ecosystem

Melyssa Griffin created this introductory guide to anti-racism for white people (with a ton of links to other resources.)

White Fragility: Why it's so hard for white people to talk about Racism by Robin DiAngelo and Michael Eric Dyson

Me and White Supremacy by Layla F. Saad

Netflix released a great documentary on the history of racial injustice in the United States.

6. Once you've taken the time to do the learning, say something.

Speak out and let people know where you stand. Your silence at this time speaks volumes.

Great resource list and insight here even if I don’t quite understand the don’t teach your kids to be colorblind point.

These are fantastic resources! As a non-Black POC, I know that even we have a lot of work to do and it doesn’t all fall on White folks. Thanks for showing your support and taking that stand as a business!!

Good reminders, especially to take the time to do the learning. Very handy resource list to bookmark and share! Thanks!

Comments will be approved before showing up. How to make your bar soap last longer What sustainability means to us.

Let customers speak for us

Love all the products. My hair feels a lot better using the shampoo and conditioner bars ♥️ 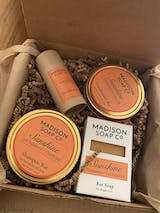 I use it right after showering. Solid cake skin moisturizer is quicker to apply (no pumping or pouring), takes up less space on shelf, has no waste (darn last bit stuck in bottle), and it goes on dryer so less seems to rub off on clothing. Lotion bar smells wonderful, and my skin feels very soft and moist all day. 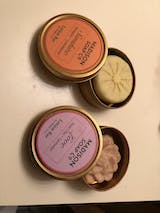 I LOVE this soap. I was in the Willie Street co-op two weekends ago and picked up the Mo’jo Coffee+Clove and and bar of Sunshine Turmeric+Lemongrass and I WILL NEVER BUY soap at the grocery store again. This soap makes showering An Experience!!!
THANK YOU, Madison Soap Co‼️ Wow‼️ 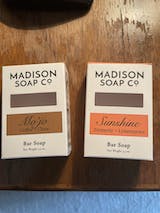 This deodorant uses the warmth of my skin to help the product glide. Once applied I'm good for the day without having to reapply. The citrus fragrance is one of my favorites and smells so refreshing. Additionally, the compostable tube that it comes in is easy to use and satisfies our families promise to reduce plastic use. This deodorant checks off all of the boxes for me. 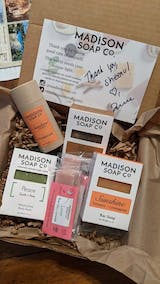 After I saw a friend post about how much she loves this soap I figured I would give it a shot since I always am looking for shampoo bars. It has not disappointed. Not only did it smell amazing with it came but there were a few other little samples in there too which was a really nice touch. Being a first-time customer I really appreciated that. The lovely presentation as well. The product itself is also very high quality and I will be purchasing again. Please note the shipping might take a little bit right now but it was worth the wait. Thank you!

We are so glad you tried our soaps! We so appreciate you being a customer.